Asia’s methanol prices have hit their highest level in three-and-a-half months partly on tight inventories at ports in the key China market, with players largely shrugging off a huge capacity that started up in Iran. 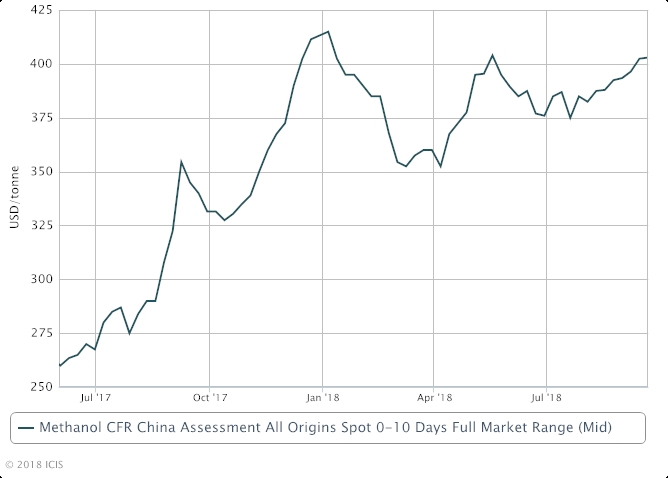 In India, methanol import prices declined from end-July due to poor domestic demand amid the monsoon season, while supply was ample coming from three Iranian producers.

Iran, which is a major supplier of methanol to China and India, started up a 1.65m tonne/year methanol plant in Asaluyeh, Bushehr province early this month.

Marjan Petrochemical, which operates the plant, aims to ship out its first on-spec volume from mid-September to early October, market sources said. Prospective buyers in Asia have started receiving official tenders from the company.

But actual methanol exports from Iran will be impeded by US sanctions, the second wave of which will be imposed on 4 November, market players said.

Many Asian buyers were wary of purchasing Iranian materials, although a small number of regional buyers still regularly procure cargoes from the Middle Eastern country.

“There should be additional competition for non-Iranian cargoes due to the sanctions,” a southeast Asian buyer said.

Market players remained slightly bullish on methanol prices in Asia as import supply is curtailed by plant turnarounds and the typical reduction in output during winter.

In Saudi Arabia, the International Methanol Co (IMC) shut down its plant on 16 September for a five-week turnaround, while in southeast Asia, Kaltim Methanol Industri’s facility is expected to undergo a 45-day turnaround from mid-October.

India could be one of the few available markets for Iranian methanol even when the full sanctions from the US are put in place. At the moment, Indian buyers are still able to secure financing for Iranian products, market sources said.

The south Asian country sources around 80% of its annual methanol imports from Iran, while the balance is sourced from other Middle Eastern countries.

“Even China, the largest buyer of Iranian materials by far last year, has reduced its import of Iranian cargoes this year,” an Indian trader said.

Market players were expecting a 25% reduction in China’s monthly imports of Iranian methanol in September, on concerns over the US’ re-imposition of sanctions on Tehran.

In 2017, China imported 2.52m tonnes of methanol from Iran. India’s imports of the material from the Middle Eastern country in the fiscal year ending March 2018 stood at 1.18m tonnes.

With reduced demand from China, Iranian methanol prices may come under pressure.

Some Asian buyers could take advantage of low prices to procure Iranian cargoes, although financing will also be an issue.

“The main huddle in purchasing Iran-origin cargoes is securing the financing for it, as there is no ban or restriction in purchasing them from any Asian governments,” a regional buyer said.

“The process to purchase them [Iranian cargoes] will be troublesome, so the price must be very attractive for me to consider it,” said a second buyer in the region.

Iranian producers are keen on diversifying their export base and look for potential buyers in northeast and southeast Asia, as well as in Europe, like Turkey.